Well, it's been over a month since I last posted pictures of the boys. With harvest and trying to sell a house and move, my free time seems to have vanished recently. So, I'm taking one for the team tonight and staying up late to get some new pics out before Aunt Shauna goes into withdrawal. Both boys are doing well and Drew just keeps growing up. 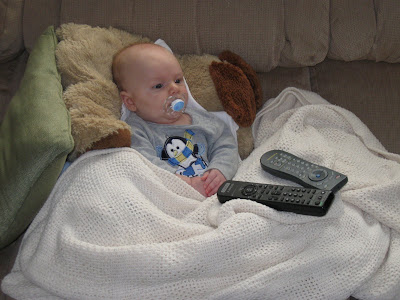 I think he was watching C-Span. He had his 2 month Dr. appointment a while back and he was 2 pounds heavier and an inch taller than Nate was at that age. Keep in mind that he was both shorter and lighter than Nathan at birth. He's just over 3 months now and he's over 16 pounds. That puts him almost 2.5 pounds past Nate at that age. I find myself wishing that Drew was twins just so I would have a counterweight for my other side while I lug him around in his pumpkin seat. It's quite a workout. Here's Nana spending some quality time with the boys in Drew's jungle gym. 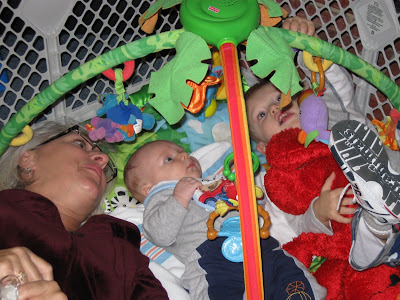 Drew expresses his wishes to grow up and be a dirt farmer like Pop... 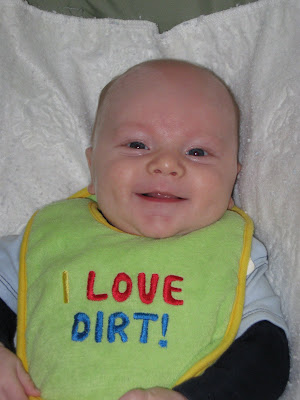 A few weeks back, Nana and Liv took Nate to some deal they had in Petersburg with people dressed up like Sesame Street characters. When I saw the pictures, I was surprised that Nate wasn't creeped out by old people in bad muppet costumes. Heck, I was pretty creeped out by it... 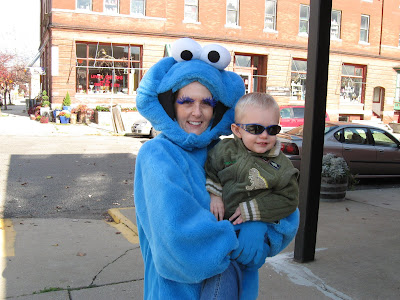 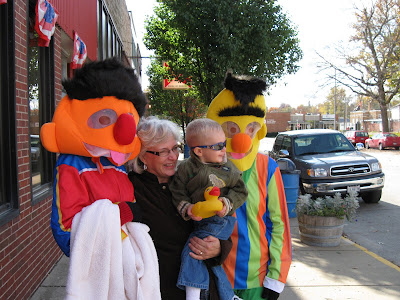 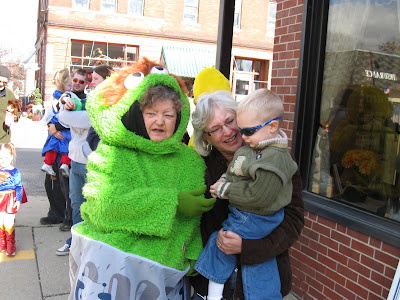 Here's some nice pics our friend Nicole took of the boys. She always does a great job snapping pictures of them... 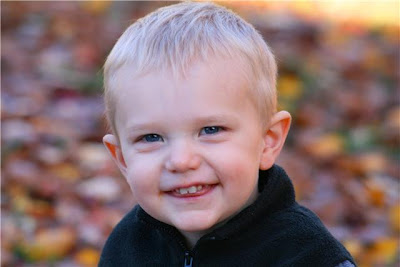 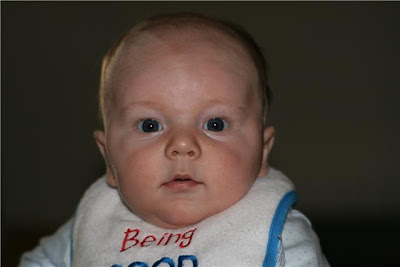 For some reason, Liv relishes the chance to take pictures of the boys while they're sleeping. 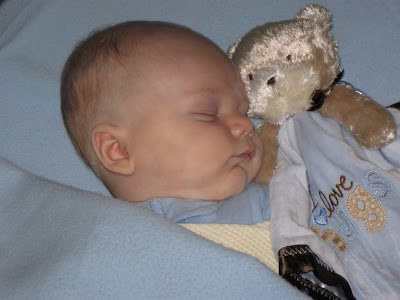 Yeah it's cute, but there's like 50 shots like this on the camera. I hope she tones it down by the time they're teenagers. Nathan got hold of one of Pop's tractor publications. Here he is trying to select which combine he would like to purchase... 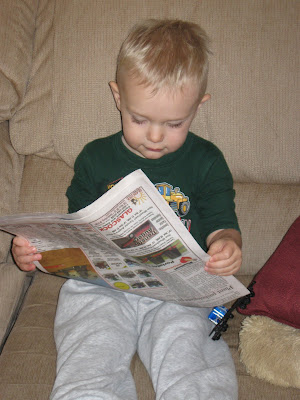 "How do you like my quasi-futuristic clothes, Mr. Powers?" 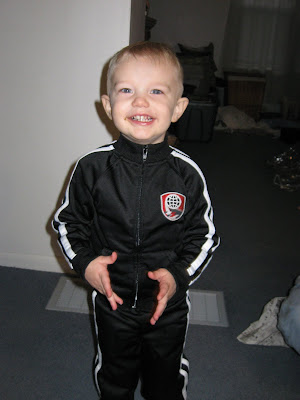 As I said earlier, we're in the process of moving to the new place. So that means all kinds of moving boxes laying around the house. What do not-quite-2-year-old boys and 32 year old boys both like to do with empty boxes? Why, build forts of course. Here was our first attempt... 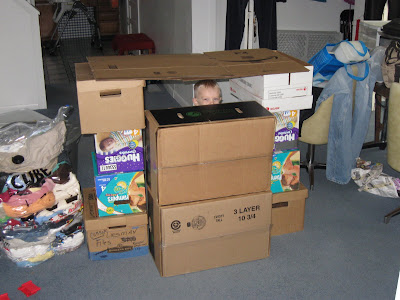 The huggies boxes really say "Don't mess with this fortification if you know what's good for you."
We built this one to ambush Aunt Megan one day when she was coming over. There's a video to go with it that I will have to post soon, along with some good Drew videos that need editing. Anyway, here's fort #2... 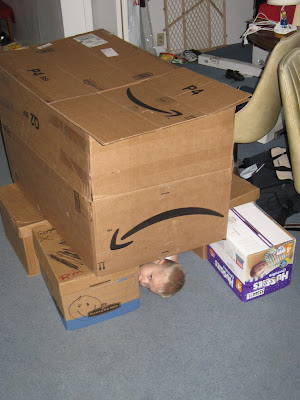 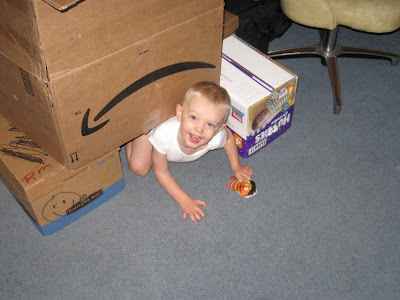 While he was in there, I just stuck the camera under the door and snapped away. I got lucky and came away with a few gems... 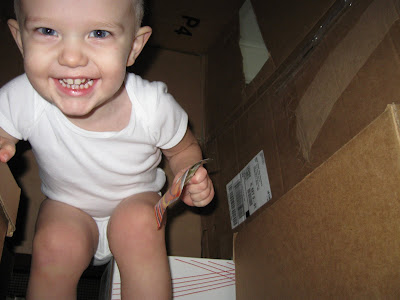 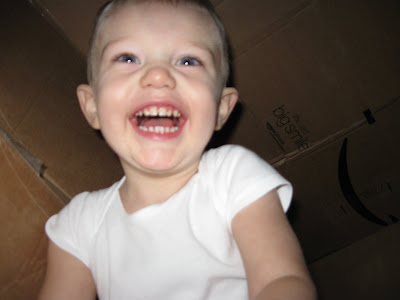 I guess fort #2 was a pants-optional fort. That brings us to tonight and fort #3 which is really more of an L-shaped tunnel. 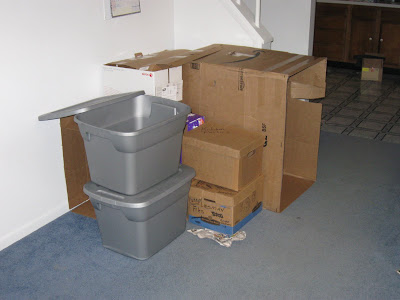 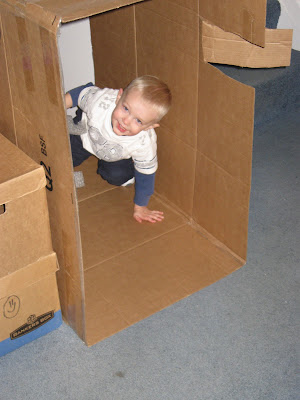 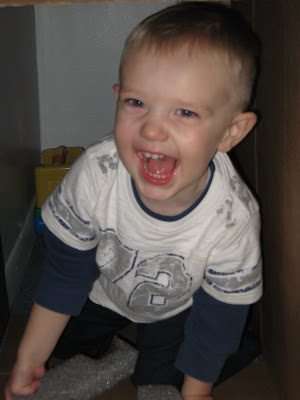 I swear, I'm never going to buy this kid any more toys. He has more fun with the boxes and packaging than anything! Here he is with a random piece of foam that was laying around. 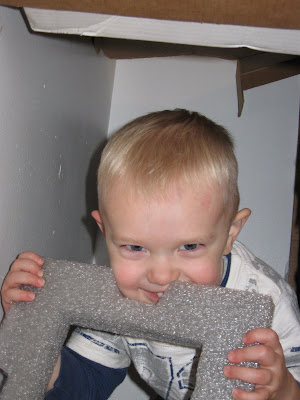 I Think She Has Something Against Mormons

I heard about this on the radio today so I looked up the video and it didn't disappoint. Enjoy!

Posted by Onebigdud at 11:08 PM No comments: 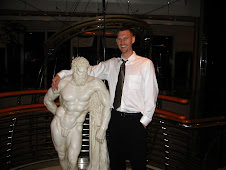 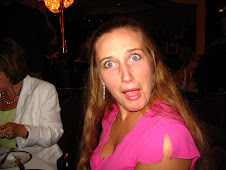 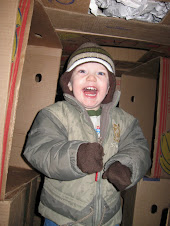 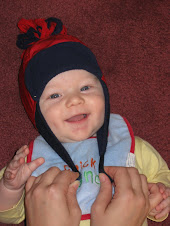